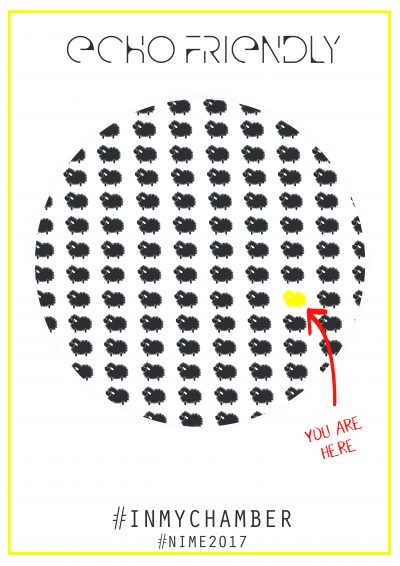 Echo Friendly addresses the creation and existence of echo chambers in our social and virtual lives. It focuses on the influence of the algorithm and its part in the creation of echo chambers in a social environment. It is the result of both selective exposure and confirmation bias; the symptom of a post-truth world.
Through this work, the project will subvert the echo chamber to create an experience in which all voices are weighted equally. The researchers will sample data from attendees at the 2017 NIME conference, collecting answers for several pre-chosen questions framed in a choice format. Through the use of these questions, the researchers will play the role of the algorithm. The collected data will be recorded and compiled according to question, then exhibited in stylized, physical echo chambers.
Echo Friendly aims to create an experience in which users view and reflect upon the existence of echo chambers outside the confines of digital information and social media. By giving participants both choice and voice, the project contextualizes and subverts echo chambers as they occur in a post-truth, information environment.